My name is Tom. My adventure with English started with a fascination with video games, barely any of which were translated when I was younger, and because I wanted to understand the stories I played I had to look up more and more words. I also developed a strong interest in cars around the same time a certain british motoring show was starting to become a worlwide sensation. I loved how the three presenters spoke and that drove me to further improve my language and later on study in England.

I’ve been working at Walk&Talk for several years now and during that time I have formed a belief that DIRECT Method is the best way of teaching students to freely and fluently use the language. I am a result oriented teacher and will do my best to teach you as efficiently as possible.

I am a bit of an anglophile, having lived in Britain for some time, I delveloped a strong affection for the culture and the people living on that odd island north of continental europe. I spend my free time playing videogames, reading novels (I especially like science fiction) and listening to dark electronica, occasionally drawing or modelling in 3d. 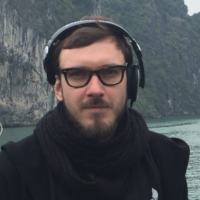